210th Session of UNESCO’s Executive Board 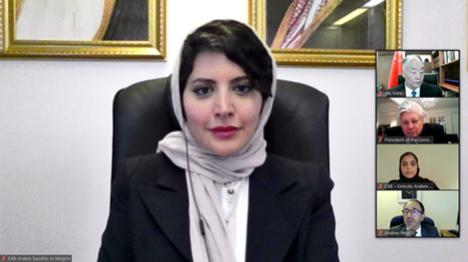 On December 3, the Saudi Permanent Delegate to UNESCO, HH Princess Haifa Al Mogrin addressed the Organization’s Executive Board to highlight several important topics that matter to the global community.

Composed of 58 Member States, UNESCO’s Executive Board is in charge of examining the Organization’s work program of work on several important themes, from education to cultural heritage, science, tourism, and more.

HH Haifa Al Mogrin stressed Saudi Arabia’s success in holding the G20 Summit this year, despite all the unprecedented challenges. The Riyadh Declaration highlights the importance of global collaboration in trying times, as well as the support for equitable access to education for boys and girls worldwide.

She also recalled that the Riyadh communiqué of the G20 summit has highlighted the pivotal role of education in the international policy agenda, citing that comprehensive and fair education for all, particularly young girls, remains the base to form a more fair and prosperous future for humanity while reaffirming Saudi Arabia’s support to the African continent and the Kingdom’s pride to be an early supporter of UNESCO’s mandate to build peace in the minds of men and women.

She also reviewed the outcomes of the G20 joint meeting of the ministers of culture, the first of its kind in the history of the group, citing the importance of the issues discussed at the leaders gathering. She insisted on the fact that cultural heritage must be further protected and promoted, setting the example of Saudi Arabia’s recent efforts to protect, promote, and preserve its underwater cultural heritage.